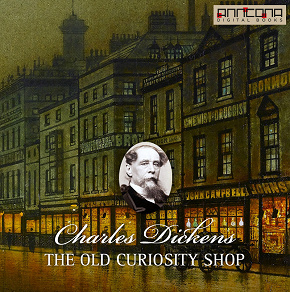 The Old Curiosity Shop tells the story of Nell Trent, a beautiful and virtuous young girl of "not quite fourteen." An orphan, she lives with her maternal grandfather in his shop of odds and ends. Her grandfather loves her dearly, and Nell does not complain, but she lives a lonely existence with almost no friends her own age. Her only friend is Kit, an honest boy employed at the shop, whom she is teaching to write. Secretly obsessed with ensuring that Nell does not die in poverty as her parents did, her grandfather attempts to provide Nell with a good inheritance through gambling at cards. He keeps his nocturnal games a secret, but borrows heavily from the evil Daniel Quilp, a malicious, grotesquely deformed, hunchbacked dwarf moneylender. In the end, he gambles away what little money they have, and Quilp seizes the opportunity to take possession of the shop and evict Nell and her grandfather, to live as beggars…

Charles John Huffam Dickens (1812-1870) was an English writer and social critic. He created some of the world's most memorable fictional characters and is generally regarded as the greatest novelist of the Victorian period. During his life, his works enjoyed unprecedented fame, and by the twentieth century his literary genius was broadly acknowledged by critics and scholars. His novels and short stories continue to be widely popular. Dickens was regarded as the literary colossus of his age. His 1843 novella, A Christmas Carol, is one of the most influential works ever written, and it remains popular and continues to inspire adaptations in every artistic genre. Set in London and Paris, his 1859 novel, A Tale of Two Cities, is the best selling novel of all time. His creative genius has been praised by fellow writers, from Leo Tolstoy to George Orwell and G. K. Chesterton, for its realism, comedy, prose style, unique characterisations, and social criticism
Listen to sample
Log in to borrow